Back in the 1970s, the Global Positioning System was deployed by the US Military. The GPS was a huge step forward in terrestrial navigation. It’s main components were

I grew up thinking that the secret to autolocation is finding a nearby fixed object to measure from. Obviously I was wrong. The GPS measures from rapidly-moving objects eleven-thousand miles away and it works great. Over the years, the GPS has been moved into the civilian sector where the original concepts continue to be developed and expanded. The field of satellite-based mapping has broadened and advanced so rapidly that it’s hard to know which spin-off of the original GPS is the best fit for a particular project.

Data Collection Using Radio and/or GPS Tracking – GPS mapping usually involves a hand-held receiver carried by a field technician. But sometimes the receiver travels with the research subject rather than the observer.
Mapping is an important part of our work. In this context, the term refers to gathering information on where stuff is, organizing it and formatting it in specialized computer files called spatial databases. The GPS and GNSS satellite arrays are key elements in several important data collection methods. 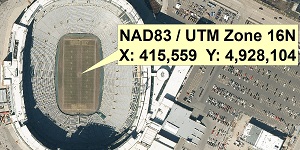 Handheld GPS Receivers – The great majority of our mapping efforts can be categorized as “natural resources work”. In general, the accuracy of recreation grade receivers operating autonomously (without differential correction) is adequate. These fairly inexpensive receivers utilize radio signals broadcast by the US Government’s GPS (Global Positioning System) satellite array.

Navigation Satellites – Systems of navigation satellites are used extensively in mapping work. The are a number of satellite arrays operational or in the works including the US Global Positioning System (GPS), the Russian GLONASS system and the European Union’s Galileo program. The individual satellite arrays are referred to collectively as the Global Navigation Satellite System (GNSS). GNSS receivers can use any well-positioned satellite for calculating a fix, regardless of which country the satellite belongs to.