CREATE A DEDICATED MAP DOCUMENT (.mxd) – This map document is only used to create/edit AISphragPhotoPtMaster.shp.

USING THE APPEND TOOL TO ENTER DATA – this content is under construction
CLOSING OUT THE EDITING SESSION – Say we’ve just finished a set of edits to AISphragPhotoPtMaster.shp. If the Editor was being used, we’ve closed it. We’ve also closed the map document (.mxd file) that we had been using. Here’s what the workspace looks like 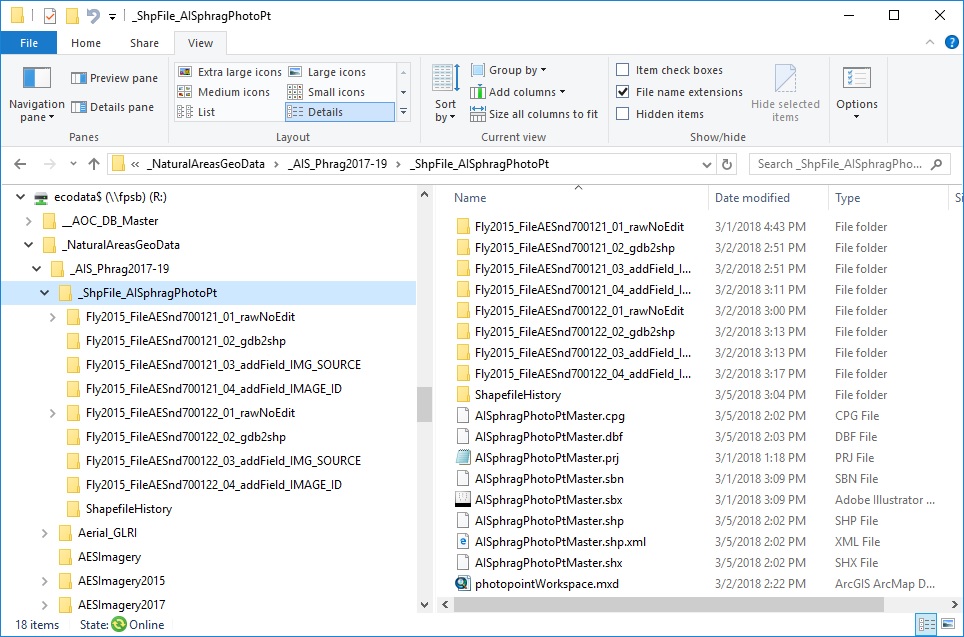 SAVING A COPY OF THE DATABASE – Now consider this. The contents of our master shapefile have changed between the just-finished editing session and earlier sessions. What happens if we screwed something up and need to get at an earlier version of the master? We’re experimenting with a procedure to address that situation. It starts when the person doing data entry decides that it’s time to make a copy. He/she copies the shapefile to the clipboard and pastes it into the ShapefileHistory folder. We strongly suggest that only the shapefile core be copied (dbf, prj, shp and shx files). If there are no older copies of the shapefile in the folder, the operation ends there. When viewed in Windows File Manager, the contents of the Shapefile History folder will be as shown above 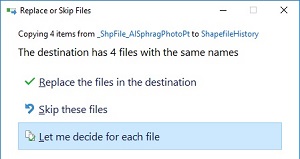 SAVING SUBSEQUENT COPIES OF THE DATABASE – If the Paste operation determines that the ShapefileHistory folder already contains a copy of the database, ArcMap displays the “Replace or Skip Files” dialogue. Select the “Let me decide for each file” option 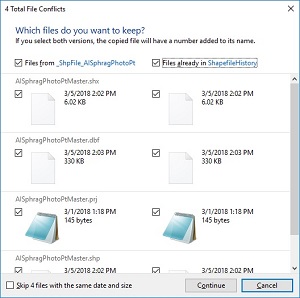 ArcMap displays the “Which files do you want to keep” dialogue. Before hitting Continue, check the box labeled Files from located in the upper left corner of the dialogue and the box labeled Files already in located in the upper right corner of the dialogue
After the copying operation runs to completion, the contents of the ShapefileHistory folder will be as shown above. Notice that a “(2)” has been automatically appended to the filename. When a third copy is made it will get a “(3)” and so on. So far we like how this approach is turning out. We don’t have to figure out (or type) file names and our archive winds up in order according to the age of the copy.